A Warning from Socrates: Waltham Forest Borough of Culture 2019

Last year, after Edinburgh, I purposely took time out to revaluate my practice, specifically to consider the weight I had given within it to performance. I decided to take a hiatus from live work and until April's shows at Schaubühne, I had been away from the stage for six months. This is a considerably longer break than at any other point in the past ten years. Over the last decade I have on average been onstage 2/3 times a month, at points several times a week, at others several times a night. What I have found during this time out, is that writing and devising is every bit as important to me as the live performance. This represents an interesting sea change for me as an artist primarily working in time based media. What does it mean in the long term then? In short idk rn, but the realisation has opened some intriguing new lines of research for me, including my upcoming residency project as part of Waltham Forest's Borough of Culture year. 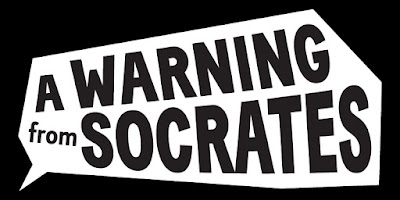 Entitled, "A Warning from Socrates", the project invites Waltham Forest knitters to participate in a new group artwork, looking at how we disseminate information, spread gossip, and share knowledge. The project will bring together knitters of differing ability, to provide skill-exchange and socialising, over tea and light refreshments. Across four sessions, the group will chat as they knit, play parlour games, and make some new connections. In this way the group will compare the knitting circle to other means of sharing information. The project will culminate in a visit from Socrates himself, who join to see what we’ve learned whilst knitting, and lead our final session. The conversations will generate a key idea, to be repurposed as a printed hoarding, to cover a building currently being regenerated by the Borough Council. Full deetz here: https://wfculture19.co.uk/events/a-warning-from-socrates

I think this piece will represent a new way of working for me, which will hopefully allow me to continue to talk about the things which interest me, but without requiring me to centre my own body as the site on which all discussions take place. It's also nice to have the opportunity to make work which isn't focused on gender (for once!) Of course I haven't entirely given up the stage, in fact "A Generous Lover" will have a UK tour in September, details of which will be forthcoming over the next few weeks.
Posted by La JohnJoseph at 3:35 AM