Hacked Knits II, Is That A Man?

Hacked Knits is a series of scarves based on on football club merch (which I have reworked/compromised) bearing text from the sites of friction between my gender presentation and the inevitable daily pushback. They are of course, a nod to the sport's field/gym changing room, a site which figures as a central site of formative anxiety for many queer, GNC, trans* people.

Last Summer I was at a bus stop a few streets away from VFD, making out with my boyfriend, when a bunch of kids started to give us a hard time. "Is that a man?" was one of their (highly unoriginal) attempts at harassment. As my bf is trans and non- binary, neither of us knew if these kids were questioning his gender or mine, which collapsed things in an interesting way. As hurtful and intimidating as it was, it also revealed so much in the linguistic-power play, as to become absurd. 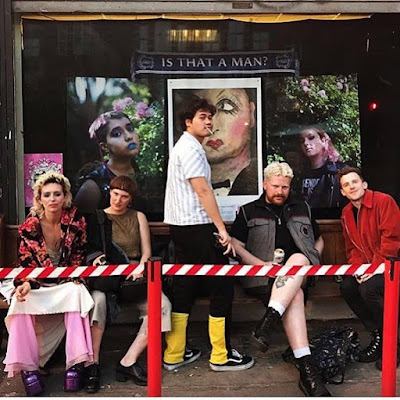 “Is that a man?” is an invective used to undermine a person’s femininity/femme identity, by alluding to the masculine/male identity “beneath”. Concurrently it functions to ridicule or emasculate male identities by questioning their authenticity. It raises our awareness of how gender is policed informally, on the streets, and simultaneously poses the questions, “Who then is a woman?” and more so, “Who gets to decide?”

In our moment of TERF crusades to defend the Holy Land of Womanhood this sinister line of interrogation also opens up a timely reflection on the 100th anniversary of suffrage (which granted the vote to only certain women), as well as referencing the abolitionist Sojourner Truth's canonical line of thought, (recorded as) "Ain't I a woman?"

Hacked Knits II, Is That A Man? was featured in FEMME an exhibition curated by Kat Hudson as part of the FEMMETOPIA festival at VFD. Pic borrowed form Hatty Carman's IG.
Posted by La JohnJoseph at 10:04 AM