Any Instant Whatsoever at And What? Festival 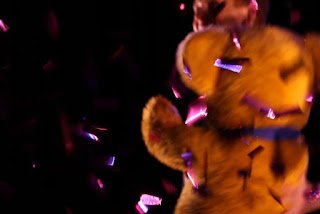 Oh the highs and lows of performance art. I don’t remember the last time I had such a joyous experience making a piece. Maybe I never have had such a joyous experience; certainly not since the very early BoyfriendRobotique days (when we were basically just covering ourselves in jam and dollar store knick-knacks as a way to take the edge of a comedown). From the first day of rehearsal there was a shared electricity, and a feeling that something magical had settled somewhere in the room with us.

I’d spent a year researching and writing, forming lighting ideas, costume ideas, working on the text that accompanies the show, and undertaking all of the arduous labour (booking rehearsal space, overseeing design, arranging contracts) which attends the making of a new work. To be frank I went into the first day of rehearsal with something like dread creeping over me, I didn’t really believe that I had the skills to direct a show, let alone a contemporary dance piece, having zero experience in either department. I felt as though I was on the bullet train to disaster, and that I was going to take all of my smiling faced collaborators out with me. That was not the case. 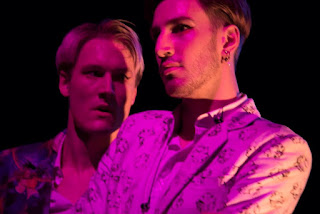 My one true loves

In large part because of the relentless commitment, dedication, and generosity of my co-performers Robert Hesp and Jonathon Luke Baker, and in no small way owing to the never ending efforts of our sound designer Philip Cornett, the process was an absolute delight. We laughed ourselves stupid, some days we’d be on the floor multiple times in hysterics. They were incredibly long, demanding sessions but I never once left without feeling elated. I learnt so much, about my capabilities, about my resourcefulness, about what it is I was aiming for, and all against a background of working with people who were pushing themselves every day to be better and bring it harder. Still now, a week after the show I’m almost tingling when I think about what a blazing time we had working together.

I can’t forget to mention the ineluctable Jack Cullen who handled PR and marketing, forever popping up in rehearsal and in our timelines, with audacious new publicity angles. Our Facebook Live video generated such a spike of interest that we were almost immediately assured the show would sell out. Jack’s constant flow of showbiz gossip enlivened many a lunch time, regaling us as he does, with the ins and outs of scene politics over coleslaw sandwiches.

Owen Parry’s dramaturgical advice was prophetic and enlivening, his conceptual read blends so nicely with his unhinged sense of humour, and lead to such strokes of brilliance as the purchase of Gina, our beloved oversize yellow teddy bear, and team mascot. A very wise witch (well Aaron Wright) once told me that what I was indeed of was a dramaturge more than any other specific collaborator, and well, shucks, I guess he was right. I really feel like this is the right method for me, though an assistant would also be graciously appreciated. The closest I have is Mickey, who played our roadie, and whom I wouldn’t change for the world; firstly because he’s an undeniably crucial member of the team, and secondly because he really goes for it when he leans in for a kiss.

And who could forget Dr Sharon Husbands as the voice of Joan Quigley, the voice in the darkness somehow underscoring our rock’n’roll desperation? Or the glorious suits from Beau Homme? Or Max Allen’s incredible shoulder pads? Or Felix at Open Barbers' really terrific haircutting skills? So many people gave so much of their angel dust - like Taylor Mac says, there is no such thing as solo performance. 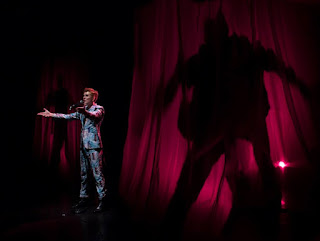 Special mention of course to Marty Langthorne, for his stellar lighting design. It’s an incomparable experience to perform in one of his plots, the atmosphere he creates is thrilling, somehow he turns black box spaces into Madison Square Gardens. When I look back at the footage, it is all I can do to watch the performance rather than the lighting states.

Of course none of this would have been possible without the support of Jen Smethhurst who produced it, and their stunt double Hannah Maxwell who took over on show day. (And what a challenge that was! Did Hannah know there would be obsolete computers and delayed set designs to deal with right up until curtain time? With fire alarms to come after….) I remain forever indebted to Andrew Ellerby for all of his support in getting the show up at Rich Mix, and on such a fortuitous date as Friday 13th too! 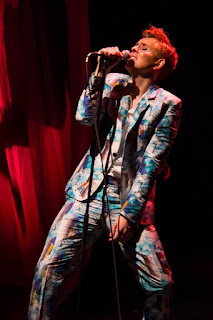 So yes, now what? Well there’s the new Alexander Geist video for “Far Worse” to look forward to, and of course the potential 2018 tour. Also, the accompanying text from the show is available NOW, published by And What? festival, if you want to delve deeper into AIDS, stardom, and the multiverse. Until next time, take care of yourself, and each other.

Pics by A.M. Hanson
Posted by La JohnJoseph at 4:48 AM