Alexander Geist's SPECULATIVE tour is well underway, so I have been spending a lot of time being him, and taking care of him lately. Just because he doesn't exist (or rather exists only in short but exuberant outbursts) that doesn't mean he doesn't have needs. The dry cleaning and ironing alone takes up half my life, but he will have his shirts pressed just so! Then of course there's the jewellery to polish and pack (Alexander only wears silver, while I prefer gold) and all the eyeshadows to organise for each gig (who knew a person could own so many shades of green?) The Balenciaga boots need a pre-show buff, and Alex needs his own preparatory cocktail of espresso, Coke, spirulina and a few muscle relaxants, served in his Garfield mug before he can step out into the spotlight. I'm also responsible for liaising with the venue tech staff, whilst he takes his power nap, and for briefing security, and any journalists as to the correct protocol. All in all it's a fairly challenging role. 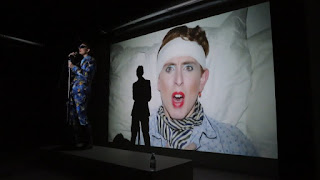 My sister (who does objectively exist) was at the show at HOME in Manchester last week. She and I watched a movie and ate a salad in the break between soundcheck and showtime, that agonising ever expanding, ever contacting period of rocketing anxiety, which threatens to go on forever (or at least until you have lost yr mind with nerves) and simultaneously to end violently, before you've even finished your kit-kat. My sister and I gossiped like a pair of grandmothers in the dressing room, amidst the warm up vocal trills and stretches. The 5 minute call never came, instead there came a thunderous knock on the door, and the squawk, "They've started!" My sister ran to her seat and I was escorted to the stage, barely buckling Alexander's boots before hitting my first cue.

Afterwards she asked, "How did you go from that to THAT in 20 seconds?"

"It's easier than you might think," I replied, "I just leave for a while and let him take over. Some people call it acting, but it's not me up there."

I'm onstage, but just in a the capacity of supervisor, I'm there to make sure things happen as they should, but I'm not doing it. I suppose that's why he's called Geist isn't it? (Incidentally not a name I chose for him). Somebody compared the process to the way Patti Smith channels whatever she's tuned into when she's onstage, somebody else suggested it might just be high functioning schizophrenia, but to me it's something else. 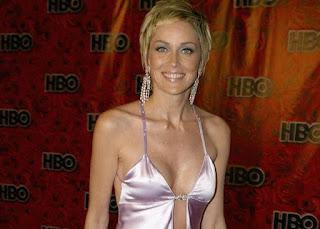 You know how her co-stars have often described working with Sharon Stone, and how she has to wait until the character had possessed her before filming can begin? Well it's like that, just like that. Sharon screams, "She's here!", and cameras roll. Conjuring Alexander is a lot less laborious, but equally mystical, and he has always been (up to this point) good enough to show up. So maybe then there's a touch of Bambi Lake to the proceedings too. The iconic San Francisco torch singer, forever without a phone, a steady home, or an email address, who would reply to fraught promoters' pleas that she give them SOME way to contact her with, "Just put my name on a poster baby, and I'll be there."

Et voila, look in the mirror and say ALEXANDER GEIST five times, or better yet, put his name on the poster, and he will appear.

(PS This wk he's appearing at Hackney Showroom on Thurs Nov 17 and Tom Thumb in Margate on Fri Nov 18)
Posted by La JohnJoseph at 2:40 PM 2 comments: