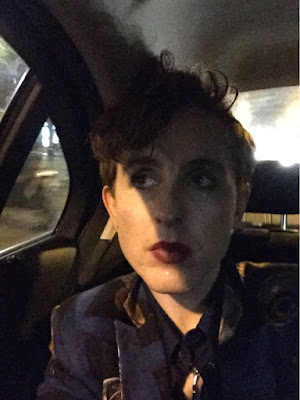 This weekend I accompanied my twin brother, Alexander Geist to Paris, where he was performing, as he insists on doing. Having followed him as far as Rio de Janeiro and Istanbul this year, I am quite immune to his signature cocktail of last minute sartorial hysteria and almost crippling egotism. His lack of preparation is always astounding, yet somehow he comes out of every near disaster looking always so unruffled (though unfortunately those around him are much worse for wear). As this was the penultimate show, in what has been seven months of international gigging to support the release of his third single, “Malediction”, I thought I ought to document it. I’m not a photographer, thank goodness, but I do enjoy catching an image in words, so here I shall try to catalogue all of his vestiary triumphs as best I can, in prose.

Heading off on Friday afternoon, amongst the malaise of office workers on piss-up trips and second honeymooners, Alexander boarded the Eurostar to Paris resplendent in a sea of greens. The tourers were two-tone, lime green in the front, with a contrasting navy in the back, giving a most structural silhouette to that universally admired dancer’s arse of his. These magnificent pants, uncuffed, rising slightly higher than one might expect in the waist, were of course cut in the studio of Beau Homme, the design duo who have been dressing Alexander for the majority of 2015. Complimenting the pants, he wore a soft cashmere sweater (Paul Smith) borrowed from his boyfriend in a color which had always proven impossible to precisely describe, until a Parisian friend hit upon the perfect term, pois cassis (smashed pea). For an extra dash of pizzaz he tied an orange Hermes scarf (well we were travelling to Paris) in a knot and tucked it below the sweater, so that only the loop could be seen. The rest of the wardrobe was accommodated in a Paul Smith weekend bag, emblazoned with a mini minor print, which I think is a little tacky, but he loves, and who am I to deny his simple pleasures?

That evening, for his performance, Alexander changed into another Beau Homme look, a deep purple suit with a print of illustrated eyeballs, paired with a navy blue shirt. He took that unruly mop of curls to task, and parted his hair, shaded his eyelids green (a lime green and an emerald green from MAC) and slid a tube of Kate Moss for Rimmel lipstick (the best buy in Superdrug by far) across his comically oversized mouth. The jewellery came from Berlin’s own Zabo Chailand, two silver rings, one in the shape of a void, one decorated with the imprint of a Japanese shift key, and a thin leather bracelet with a magnetic fastening. In addition he wore a crucifix of Tibetan silver, given to him at Christmas by our dear Mother, all in all it was quite an impactful ensemble.

Since he had Saturday off (as did I by proxy) Alexander slept until 5pm, awoke in a flurry and bolted out of the door desperate to visit Dammann a Freres, Pain de Sucre and Palais de Thes, to stock up on those essentials he simply couldn’t leave Paris without. Yes, it takes a true Englishman to shop for tea so insistently in Paris….For this shopping trip, Alexander braved the rain in the very same eyeball print trousers from the night before, a pair of somewhat battered commes des garçons sneakers, a black Raf Simons turtle neck, and a blue trench from Beau Homme, this time illustrated with a slightly surreal combination of classical busts and ladders. The crucifix looked quite stark and resplendent against the turtle neck, there was something almost Jesuit about it, and above it all he held a turquoise fold-away umbrella, purchased sagely for €1.99 from DM. As luck would have it, after grabbing those teas he so desperately needed, and catching his breath briefly over a citron pressé, he learned that he was indeed on the guest list for Roisin Murphy’s sold out show at Le Trabendo! Fortuitously he had met Whitney Weiss, just the night before, which was something of a shock to him as he had been convinced she was an alter-ego of his pal in Berlin, Jared Abbot. Not only was Whitney a fully actualised human being, she was also a DJ and opening for Ms Murphy - et voila. The surprisingly small venue was terribly humid, so Alexander wisely slung the trench over the banister in front of him, and peeled off the turtle neck to cool off in a plain black Top Man t-shirt, stuffing the other layers into a blue and orange pixilated reptile print rucksack, from Marc by Marc Jacobs.

Sunday was a day for serious cultural endeavours, a trip to Musee Cognaq-Jay, the Instituit Suedois, and the Palais de Tokyo, with just a small pit stop for a three-hour lunch at Les Philosophes. It was here, at the restaurant, in the company of the experimental photographer Malik, that the color “smashed pea” was designated to the cashmere sweater Alexander was once again wearing. This time it was on the shoulders, worn against an emerald green silk shirt (once again by Beau Homme) and those two tone trousers which had become the corner stone of the weekend’s wardrobe. Later, for dinner at Le Zephyr, as a slight chill had descended and he was seated outside, he added the blue trench and the orange silk scarf, and enjoyed the company of Stév, the fellow who had in fact brought him to Paris in the first place.

Monday came as Monday will, and in spite of promises made and plans projected, the scramble to Gare du Nord unwound like clock work. Barely making it in time to check in, after a ludicrously last minute stop at the billeterie to reprint the tickets, Alexander darted onto the Eurostar and threw himself down in the seat next to me. I have been flipping through Metropolitan, the onboard magazine, and slugging a bottle of apricot juice in an attempt to cure my hiccups. I am refusing to give him the window seat, and so he is sulking next to me as I write, looking still quite chic, I must say, in his petulance, and a long sleeved t-shirt with Oscar Wilde’s face emblazoned across the front and the legend, I have nothing to declare except my genius, trailing down the arms. He has on a pair of tortoise shell sunglasses, and is emanating both waves of simmering resentment, and wafts of Voyage by Hermes. The weekend bag, the rucksack, and a transparent carrier bag full of tea and rose marshmallows have been thrust onto the glass shelf above my head. I wonder, if that luggage rack gave way entirely, would I die instantly? And if so, would there be a more glorious (and naturally hilarious) way to go, than to be crushed by all my brother’s suits and shopping on the 11.13 to King’s Cross, like a Morrissey lyric?
Posted by La JohnJoseph at 3:23 AM No comments: