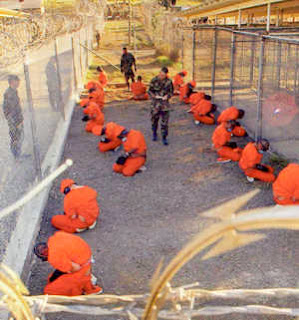 There's something most definitely post-Guantanamo in the air, or I should say, post-Guantanamo scandal, because this is the Guantanamo era. Surely one of the most iconic images of this new century, the hooded prisoner, arrested without proper cause and imprisoned indefinitely, has become the emblem of how power works today. Whatever stories we invent to justify it, it can't be vindicated, and so it has mutated into an omnipresent vision which both flags up the ongoing horror of the situation and simultaneously expresses our collective desire to hide our faces in shame for allowing it to happen.

It intrigued me to see how the image was circulated on the catwalks over the past two weeks. The two most poignant examples for me where Christopher Shannon and Margiela Artisanal (now under the direction of Galliano). 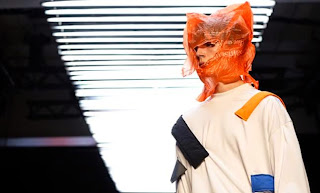 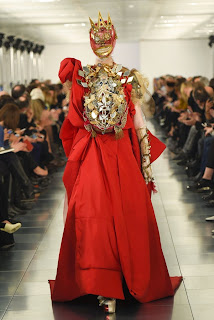 Shannon's collection is all about faking it and making it, and it both brilliantly desirable and utterly hilarious, touched with a deft charm and wit. Margiela's couture collection is practically the polar opposite, bombastic, gothic, jagged and some how gory. The designer's P.O.V's are in fascinating conversation, being break-out-wunderkind and grand-dame-on-the-comeback, respectively. The houses, one emerging and one seminal, are light years apart. Yet, the masks was for me, the central image in both collections.

And as always, the discussion sends me into a reverie, centred on this image. 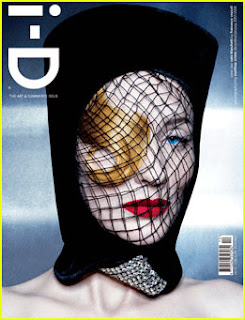 Shannon's corner shop and supermarket plastic shopping bags on the head talk to me of burning the candle at both ends, in a Homerton studio, of pressure-cooker routines punctuated with trips to the off-license and the Turkish grocery store. It was a resonant detail which gave the collection a note of realism and of course, self-depreciating, self-reflexive humour. Margiela's masks are of course iconic, but the final look, a bejewelled skull of a piece, took it into new territory (very Galliano territory one might say).

Pat McGrath handled the maquillage at Margiela, and Issamaya French (2015 nominee for coolest girl in the universe) did her duty at Shannon. There's perhaps a feminist perspective to consider here, how the culture wars over the hijab (as short hand for non-Eurocentric female (in)visibility), but that doesn't seem to be the most pressing point. Rather it's the mask as concurrent revelation and concealment that has caught my attention.

The way a mask calls our attention to the face whilst obscuring it, in the horror movie tradition, it's a process of writing a horror on the surface which images a horror even greater beneath. In the contemporary cultural matrix masks don't flag up any creepy psychotic outsider as someone to be genuinely afraid of, but actually symbolize the horror we're all living in. We are the monster, and we are ashamed.

Posted by La JohnJoseph at 7:52 AM No comments: 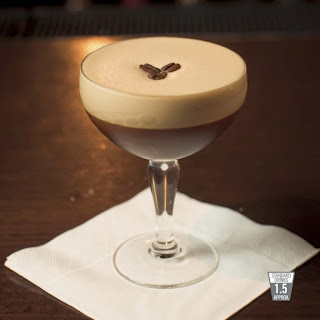 I'm not much of a drinker, alcohol makes me too morose, or perhaps, even more morose. I also have to be extremely disciplined with my coffee intake, as caffeine makes me wildly over-excited and borderline psychotic. So maybe you wouldn't immediately leap to the conclusion that combining booze and java would be a good thing for me; but it is, in the form of the espresso martini.

If there is a promotional campaign to be launched for this velvet conduit in a glass I would like to front it, if there is a magazine advertorial to be shot, I would like to be smirking front and centre. They say you shouldn't mix your uppers and your downers, but what do they know? Have they considered how the caffeinated rush in the cocktail allows me to confidently hold forth with all those profound realisations the alcohol within helps me elucidate? With an espresso martini in my hand I feel bold enough to decide on tiling my bathroom in marble, and drunk enough to do actually do it.

Not that I'm suggesting we rush into things wildly, certainly we should talk things over, over a few of these frosted, creamy alcofrolic tipples! I'm the kind of person who lives life, or tries to. Maybe I've been too timid previously, but the past is the past, you know? So let's talk and see where we are and then just improvise from there, cocktail glass in hand, and just go with it.
Posted by La JohnJoseph at 7:55 AM No comments: