In a wk my debut novel "Everything Must Go" is published by ITNA. 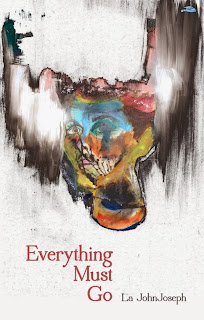 There is an exclusive extract up on Dazed right now, and next week there will be an interview too! PLUS I'll be having a few lil launch events over the next few weeks in my home cities:

I hope that's enough to tide you over until the book makes its way to your sticky hot little paws. You can get a copy from me at one of the upcoming readings or in fact order it from the publisher direct of course :) http://itnapress.com/titles/everything-must-go-by-la-john-joseph
Posted by La JohnJoseph at 2:31 PM No comments: 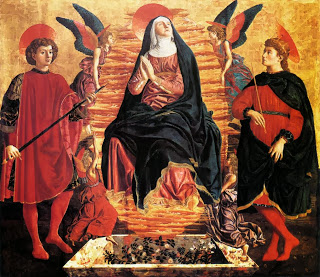 Andrea Del Castagno, 'Our Lady of the Assumption with Saints Miniato and Julian'

I went to Mass today, for the first time since I was on tour with my dear brother Alexander, and our dear friend Matthias. I went because it was Ash Wednesday and I observe Lent each year, in my own confused way. This year I thought, I would step up my religious observance game, and start as I mean to go on, at Our Lady of the Assumption, in Bethnal Green. It was not a densely populated service, though much more diverse than I had expected, and with responses from the congregation which differed to the ones I learned in Liverpool all those years ago. All said, it was a quietly moving affair, calming if slightly dour, but throughout it I felt hot-wired to thousands of years of culture and devotion. As the sirens wailed along Bethnal Green Rd and a thirty-something local resident ran in twenty-minutes late, replete with a carrier bag of her daily detritus, to nudge up to her dear old Mum in that millennia old building, my thoughts wandered back to the days when the pews would surely have been packed. I mused on how this church had stood through two world wars, through Thatcherism, gentrification, and vandalism. When the ashes were applied to my foreheads in front of the altar my mental landscape was purely medieval I had visions of serfs and pious ladies alike spanning centuries, awed by the penitence and mystery awaiting them during the month of Lent.

My family come from that part of the country which remained resolutely Catholic during the Reformation, the civil war, the Jacobite uprisings and on. The persecutions of Catholics in the UK is well documented but not the point of this piece (though worth looking into from a historical point of view if you're that sort of dork). I was raised very much in the belief that the faith had been defended at a great cost, and that I was a part of that history and the process of both keeping it alive and passing it on. To who? Well, maybe you lover.

I don't think I have the evangelical impulse or the urge to call for conversions, if only because all of my travels and studies and "life experiences" have led me to believe that God reveals Himself to everybody in different ways. If you find your way to enlightenment, to an understanding of the universe, to peace and love and well being, through yoga, the Torah, poetry or psychoanalysis, well, that is just marvellous I'd say. Because that is the nature of God, infinite and compassionate and dare I say it, appropriate to your needs.

Have I gone completely mad? Well, maybe, but that's another story. People ask me how I can seriously believe in God, seriously have religious or spiritual convictions - almost as if I had a choice. I've know since I was a child that there universe was far beyond human comprehension and that a higher power was at work, and yet I still do not claim to know exactly what that power is, only that it moves through everything. Catholicism is my gateway into the infinite, and also a way of honouring the poor downtrodden people who spawned me. It not only gives me a cosmological curriculum from which I can move into independent research, but more over it gives me, in this frantic time of international corporate horrors which serve the heinous lies of globalisation, a place. As soulless monoliths plaster their inane logos over every square centimetre of the horizon, and transform us all into minimum wage cartoon-book goons when we're on the clock and thoughtless, ravenous consumers in our "free" time; as we're reduced ever more into one giant stew of human remains and instant gratification, one contactless paypal transations at a time; as all local, cultural traditions are steamrollered by ever larger television screens collectively lobotomising us with news reports on Miley Cyrus' instagram feed; it's all a person can do to stake a claim on their own histories and narratives and not become completely convinced that they're just one year and a set of veneers away from reality TV fame and a Broadway transfer. Dusty O once put it nicely when she said, she'd rather have the Queen on a plate than a plate of McDonald's; and though I am decidedly not a royalist, the sentiment holds true. I want to know where I came from and I want to use that knowledge to resist the suffocation of a rabid tabloid press, a corrupt government and the endless worship of American cultural imperialism. If we can remember that we were not in fact born in the queue for an iphone 5, and that the sum total of life is not getting regrammed by Nicki Minaj, there is some hope we can resist our slow death march towards becoming full homogenised, genetically modified perfect prisoners of an artless world ruled over by despots who tweet in real time.

There are some people who think celebrity is fiddle-faddle (a technical term not nearly used often enough) and who instead believe that science and science alone has all the answers. Now, I don't even have the questions, so I marvel at those who claim to have it all figured out, scribbled on the back of a copy of "The New Statesman". I believe in science, I am not a fundamentalist or a literalist, I do not believe the world was actually created in seven of your actual Earthling days. I understand religious texts to be philosophical and illustrative of certain principles, and in many cases are in harmony with those texts, evolution being the obvious example. The theory Darwin (who btdubz was both a religious fellow AND a scientist if you can comprehend THAT) presented to the world follows, as far as I know, the steps of Biblical creation. I think that's wonderful because I am not actually calling for any scientists to be burnt at the stake, not even the ones in the horrible high-waisted pants, that is how understanding I am, in spite of my irrefutable Catholic blood-lust to destroy and condemn anyone who does not believe as I do.

I am told that religion is the source of all evil and that rational thought has liberated us from the dark ages. I cannot, and would never care to, defend the horrors perpetrated in the name of religion; the Inquisitions, witch trials and concealment of child sex abuse cannot ever be called anything but tragedies brought about by power hungry criminals. In that respect, science and religion are not so far apart, hasn't science amongst its multitudinous gifts given us the atom bomb, zyklon b and drones? Religion and science have both frequently been highjacked by bloody minded individuals, and merciless cabals in order to control, manipulate and oppress - but that was never their original intent, nor should it mean that either is now invalid.

Religion and science are both tools which humankind can use to learn about the universe, art (Nietzsche's fave) another, philosophy another, and so on. To believe that science is the only thing which can tell us reliably about the world is deeply misguided, because it is born of the human brain, and that I am afraid to say is painfully finite. Worse yet, by insisting that science is the one way forward, we find ourselves in a dictatorship as defunct as anything the Pope might insist upon. Science can show us a lot, but the problem is that it denies everything it can't explain, and when we are well aware that a huge part of the human brain is left unused, that is surely a nonsensical position to hold. Every culture in the world has spiritual practices, creation myths, often sharing archetypes, there's no getting away from those truly universal longings, and for science to relegate them to the realm of projections and delusions, does no justice to the great minds of the labs. Likewise, religious believers who insist every word of the Bible and decline to see it as abstract thinking are missing the divine gift of inquisitive intelligence almost entirely. The universe and the life within it is a complex harmony and we must understand it as so in order to sing its song.

I find that song wherever I go, even when I'm not looking for it. I find it in Shakespeare, in The Birth of Tragedy, in Jung's memoirs, in Still Falls the Rain, in the Bangkok Museum of Contemporary Art, in Walt Whitman and in Lupita Nyong'o's speech at the Essence awards. This song illuminates me, and comforts me, it connects me and consoles me, enlivens me and corrects me, I'm hoping it will educate me and even show me how I can use what I have to make this war zone of a world more beautiful, kinder, compassionate and cognisant. But that is all to come - for now all I have to say is that life is a miracle I am happy to participate in, though I may not fully understand it, and I welcome all paths to wisdom. 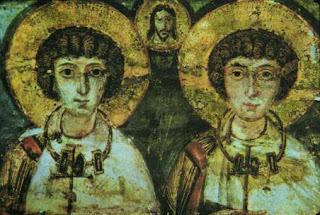 Gay Saints
Posted by La JohnJoseph at 3:18 PM No comments: