"Cover Her Face" opening London Feb 2014. I'm playing The Duchess herself, in this late '50s gay gangster revision of John Webster's Jacobean masterpiece, "The Duchess of Malfi". The writing is so deathly brilliant, the cast assembled so strong, and the vision of the piece so bold, I just cannot wait to get it onstage. 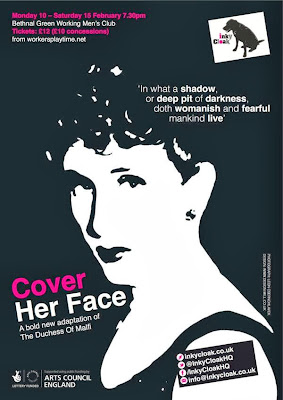 Theatre is not really my background, I'm from the gutter of performance art, and this is my first attempt at a role in a legitimate play. As opening gambits go, it's a stark one, taking on one of the most iconic English dramas and in such a sweeping reinterpretation of the text. When I was asked to audition I thought that there was absolutely no way I could take such a role - which is exactly why I'm doing it. I don't want to be ruled by fear or insecurity, I want to stake a claim for myself on the world; I think this is what will make me a great Duchess, as the play itself centres on her tragic quest for selfhood.

That's not to say it's not terrifying, it's a part that requires love scenes, double-bluffing, and a psychedelic death, no mean feat even for a seasoned, trained actor. But I think I'm ready for it. I'm channelling Novak, Gardner and a little K.Hepburn, the less bubble-gum stars of the era, and trying to create a Duchess who has a lot of poise and elegance, but a clear, strong will and no little temper. My Duchess will not be a push-over or a prisoner of her fate, and most of all she will be a sexually engaged woman. Not only does the Duchess chose her own lower-class lover Antonio, in spite of the very obvious dangers, but there's a most definite charge between she and her twin brother, Ferdinand, which I want to riff on.

Most of all, I want to give the Duchess a real note of dignity and bravery, to make the role a suitable tribute to gender nonconformists of all presentations and epochs.
Posted by La JohnJoseph at 7:45 AM No comments: