You’ve gorra laugh with Dot though, she’s always been a bit barmy. She tells people we’re sisters. I don’t mind because over the years she’s been better to me than me own sister was, and that’s for sure. She’s always going on about Joe, ‘er ‘usband who she’s been married to for forty years, saying that they never have sex anymore and how she needs it, and though she might be a grandmother but she’s still a woman. She got it into her head last Christmas that she was going to divorce him and she dragged me down to Southport crown court to get the papers. We went into Debenhams for
a coffee first of all like, her Tracey’s behind the Chanel perfume counter there so we get a discount in the café. I prefer M and S I must say, but Dot’s a pretty determined sort of character. Anyway, after a bit of a wander in Debs, we get to court, and she storms up to the registrar like a woman possessed - I’d told ‘er not to have two shots in her latte. She says to the poor woman behind the desk, “I want a divorce!” and the woman looks up and says, “Darling we’re not even married yet,” which I thought was quite amusing but Dot chose not to hear. She said, “I’ve been married to him since 1969, I’ve served my sentence, I want my freedom!” like she’d rehearsed it, which she probably ‘ad, and the woman at the desk said, “Oh. Oh,” she said, ”And
whose fault is it?” “HIS,” said Dot, “I haven’t had sex in five fucking years!” Well, now, the woman at the desk took it on the chin, but the old fella behind us who’d come about renewing his vows turned a terrible shade. She said Joe had been suffering from erectile dysfunction for the past few years, which was hardly surprising given that he was playing in a Status Quo tribute band. It’s not the music that does it she told me, but all the drinkin’ at the shows, you know?

I said to her, “Dot, what on earth are you gonna do without ‘im? You’ve been together for a very long time.” And she just said, “Get meself a new man, from the internet.” And I said, “Dot you can’t just put a bid in on ebay on new fella.” And she said “I know that, I’m joining E-harmony. I’ve already started on me profile.” An’ I said, “Dot! At your age?” And then, do you know
what she said? The cheeky cow, I could’ve murdered her! She said, “Elayne, I only look the same age as you!” Well, I could not believe it! She’s 67, an’ I’m only 48, she’s twenty-years older than me the cheeky bitch. She said, “An’
I’m a size 12 an’ all now, like you.” She’s a bloody 16-18 if she’s anythin’. She said, “I lost all that weight off me hips in pilates, but I didn’t loose anything of me chest. I’ve still got great tits Elayne!” Well what do you say to that? In British Home Stores during the Chrsitmas rush of all places? I just said, “Dot I think you’ve spent too much time on the sunbeds, girl” and I ‘ad a root on the buy one get one free underwear rail. Well, she decided not to divorce Joe for time being, she said they’d got the kids and the grand kids to think about, and the e-harmony membership was £15 a month.

She does look good on it for 67 though I’ll give ‘er that. Well she should, she won the lottery, you know, secretly, about five years ago and never told no-one. But I guessed. She started shopping at Sainshurys, when she’d always been devoted to Morrissons and then she went on a couple of cruises an’ all. And then, she had a face lift, she went to Poland for it and ‘ad
to stay there for four weeks. She’s never been to Poland before and I thought, what a funny experience. To go and visit another country for the first time and all you see is hospitals and waiting rooms, and when you do get to go sightseeing your face is all bandaged up, with surgical tape and compression masks, in case your whole gob falls off. She said, “Our Tracey didn’t even
recognise me when she picked me up at the airport when I got back,” and I said, “Well Dot, that’s because your Tracey’s got astigmatism and she won’t wear her spectacles in public. She doesn’t know what she’s lookin’ at half the time.” It’s true. She went and picked her son up from nursery once and it wasn’t until she got halfway up the Formby bypass that she realised she
had someone else’s child in the back of the car. A little girl, called Britney as it turned out, and it’s only because the mother was manic depressive in an upswing, that Tracey didn’t end up with a suspended sentence.

Anyway, long story short, I do not look the same age as Dot, and we are not the same size. I’ve lost two stone this year, working this new job and living a generally healthier lifestyle. I’ve always had quite a sweet tooth, and I used to eat all kinds during the day, I was always snackin’ on biscuits or crisps. But now, I just have a piece of toast, with a tiny, tiny bit of marge on it
at breakfast and then I’ll have the same again, about six o’clock once the kids have ‘ad their tea. An’ I do ‘ave some coffee durin’ the day like. If I’m honest I found it really hard in the beginning, dietin’. But then Jessica, my second oldest girl, told me that she ‘ad this slimming powder and she said it really helped her not to feel hungry all the time. So I tried that and it really worked, it gave me terrible ‘eadaches, but I lost weight dead quick like. And it wasn’t for about a month that I realised I was actually taking speed. Our John, my eldest lad, said “Mother, what the Hell are you putting in your five alive?” And
I said, “It’s just that stuff our Jess gives me, it’s a weight loss powder.” Well, he snatched the bag off me and gave it a look over. It was a really cute little bag actually, tiny with little red lips on it, and he said, “Mother! No dietary
preparation on the market is called pink champagne – this is speed! You’ve been taking amphetamines!” And so I was. But I tell you what, it didn’t ‘alf ‘elp with the weight loss, and the whole house was immaculate.

Well, I didn’t mention the speed to Dot, she’s got a thing about drugs, she used to be a traffic warden you see. She wouldn’t even take HRT when she went through the change, which might explain why she’s so sex crazed now. You know, when she came up here last time she was going on and on about this bloody rampant rabbit of hers, and our Jessica’s sitting there,
mouth wide open in shock. Of course I thought she was talking about a pet, and it wasn’t until we were in the café – Tiffins café it was, where we always go because I’m obsessed with the egg custard – it wasn’t until we were there that I realised that Dot was talking about a bloody sex toy. I just thought, “Here we go again, Dot’s having one of her post-midlife crisis pep
talks,” and I ordered me egg custard. Only when the waitress comes by, she doesn’t shut up about her bloody vibrators like anyone normal would, she just keeps rabbitin’ on – so to speak. And the waitress is all agog trying to write down our order but really just too entranced by the rendition of the Joys of Sex Dot’s delivering to our Jessica, who looks like she could die of shame at any minute. So, off the waitress goes, desperate to tell all the girls in the back what she’d just heard, I could just tell from the look on her face, and Dot starts off about love gels. Well, now our Jessica, who’s 21 mind, so she’s not a
baby, is tryin’ her hardest to pretend she has no idea what Dot’s talking about in the vain hope that she might shut ‘er up, only Dot doesn’t take the hint and tries ‘er very hardest to overcome the communication barrier. She says to Jessica, “You know, you put the gel on before you use the vibrator. You know, on your bits.” And Jessica just looks at her blank faced though I can tell she’s imploring Dot to say nothin’ else. And of course, just as the waitress comes over with the tea an’ my egg custard, Dot goes, “Oh for ‘eaven’s sake Jess! You rub it into your clitoris to give you more sensation in your orgasm!” Well, our poor Jessica nearly fainted. I thought it was all very funny meself, well you’ve got to laugh aven’t you? Especially when Dot’s around.

Anyway, all that sex ed , it must be working because she has left Joe. She was having a fling with some fella from Texas she found on a Bay City Rollers message board, and they’d never met but she was all for flying off to Texas and leavin’ Joe and ‘is erectile dysfunction behind for good. Only before she could leg it there, her virtual online lover who she’d never met, was stolen by her virtual online best friend who she’d also never met. So she blocked them both - and I thought, well that’ that, she’s stuck with Joe for good now. She put a few more of those big plastic butterflies up on the wall outside her bungalow to cheer ‘erself up. Our John says the place looks like it was done up by Jeff Kooks, and I said “Well she is a bloody Kook isn’t she!” But then
clear out of the blue I get a message from her, on me facebook wall, I don’t think she really gets the difference between sending a message and writing on your wall, but anyway, I get this message that just says, “Hi Elayne, met a new man called Mark online, fell in love, and moved to Brighton with him, for good! Text me.” Text me, just like that. Of course what lover boy doesn’t know yet is that, although in her mind Dot may look the same age as me and be the same dress size, she’s actually 67 and a size 16-18 if she’s anythin’.
Posted by La JohnJoseph at 5:15 AM No comments:


Mimzy playing with Dean Wareham and Britta at Casa da Musica (and wearing Versace with her Alexander t-shirt, no less). 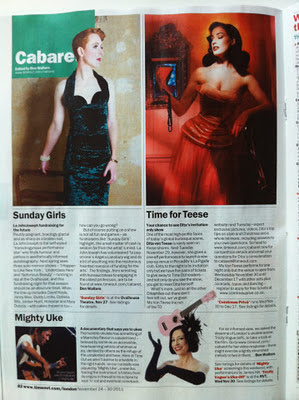 Myself and Dita Von Teese babeing it up in Time Out.
Posted by La JohnJoseph at 4:23 AM No comments: 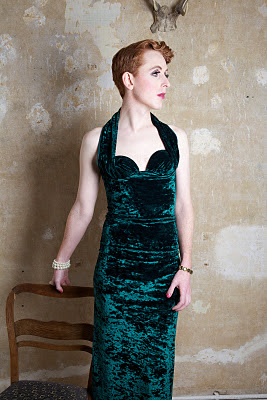 Come one, come all to this star studded early evening of performances at Ovalhouse featuring home made baked goods and starring the talents of:

Tranny with a fanny HOLESTAR

Funds raised go towards staging the upcoming "retrospectacle" of my solo theatre work at Ovalhouse in Spring 2012. 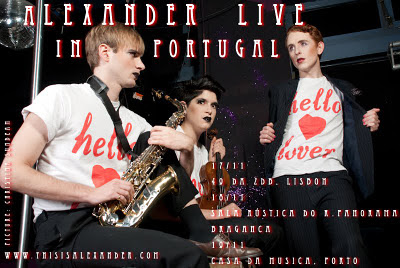 Alexander goes to Portugal this month for three shows, culminating at the Casa da Musica Festival in Porto.
Posted by La JohnJoseph at 2:39 PM No comments: