Electroqueer Berlin 2011 is the title of this hit mixtape from the cultural pump house that is Expatriarch. My disco alter-ego Alexander
is very pleased to be sandwiched in there between Aérea Negrot and Steffi. Hit it!

Posted by La JohnJoseph at 9:12 AM No comments:

You´ve got lip synch on your teeth. 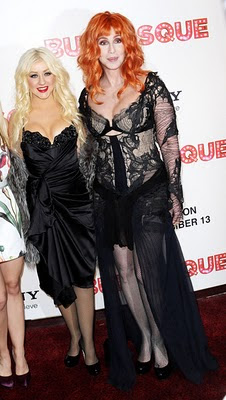 I watched Cher´s hit film "Burlesque", needless to say it was dreadful with the only real narrative action coming from Christina Aguilera´s arsenal of Halloween store wigs.

But, it really got me thinking about the fine art of lip synching. As in all movies, the singers lip synch their parts to pre-recorded tracks to make editing easier, only in "Burlesque" we´re watching two of the paragon´s of lip synch culture at work, that is to say the ladies lip synchers the world over move their mouths too. And both of the leading ladies, it must be noted, are really working a high drag look. Pop will eat itself. The supporting cast in the movie lip synch onstage to the voices of other legends (Marilyn Monroe et al) which gives the movie a cute sort of cut-price glamour, but really it could be said that the whole movie lip synchs.

I mean isn´t it the most blatant "Cabaret" re-do? Scene for scene, theme for theme shot for shot, move for move, Fosse´s ´70s masterpiece is bled dry. Rakish millionaires, sexually ambiguous room mate love affairs, chorus line pregnancies - it´s all rented. (And what isn´t taken wholesale from "Cabaret" comes bit by bit from "Showgirls", itself a compression of a couple of decades worth of low rent cinema). Alan Cummings in his role as door host is the most clear example, reprising as he does his role as the Emcee in the stage version of "Cabaret" with more than a dash of Joel Grey in the movie version. In effect our dear Mr Cummings is lip synching his role too.

Sadly though the movie´s budget is so astronomical and obvious that there is never room even for a moment for any amount of magic to happen. That beautiful gap between the body and the voice is barren, there is nothing at work in that no-man´s land to suggest that the movie is sitting all the way through. Where every good lip synched drag show goes is to a place of deliberate suspension of disbelief, into a place where the pleasure is choosing to believe in the sorcery you see onstage, to revel in the Emerald City and not reveal the mundane nature of what is behind the curtain.

"Burlesque" however is a wonderland so woefully heavy-handed in explaining every minor, irksome plot detail that a person cannot help but feel insulted and deprived of the wonder of projecting themselves into the story. Surely half of the thrill of a movie is feeling as though the circumstances onscreen have some definite impact on your own well-being? For me "Burlesque" is all about the lip synching, and the knowledge that as yet I have not been so decimated by Hollywood tragedies like this one, that I can no longer crowbar my way into the horrors of contemporary culture and find a way to explore.

(With thanks to Joey Hansom for the title of this post).
Posted by La JohnJoseph at 3:56 PM No comments: 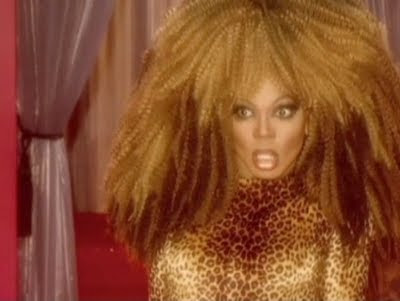 During a conversation on language with my polyglot boyfriend he informed me that whilst in English pronouns (and some nouns) are gendered (he/she, actor/actress), and in German the articles are likewise (the notorious der, die, das), in Hebrew the verbs actually are too.

That is to say, the parts of speech that refer to the actions of a person or that person´s state of being, are also gendered. For example הוא רץ, היא רצה (he runs, she runs) with "רץ" representing the masculine running and "רצה" the feminine. This, I found fascinating, if at first a little bleak and inescapably essentialist - as if it wasn´t bad enough being referred to by one´s assumed gender, one also has to literally "act"accordingly.

I was however further informed of the possibilities in Hebrew to move beyond the limitations I had so quickly assumed, in that it is possible for you to deliberately say "היא רץ", ie, "she runs (in the masculine)." It hardly sounds poetic in English but can be very innovative in Hebrew, in a slangy subcultural way, which let´s face it is the only way. In English one can of course deliberately "misuse" the pronouns to come up with phrases like, "David is late, she is such a lazy bitch," but that is hardly an equivalent.

Then I thought about the high queenly habit of referring to oneself as "she", as in "She likes a heel" (where "She" replaces "I" - excuse me if I am over-explaining this). It counts as a refashioning of one´s own sense of self, almost outside of one´s self, sitting alongside one´s self and in dialogue with her. The interior personality refers to the exterior socially coded, gendered persona as "she", another person apart.

Obviously it´s meant first and foremost as campy and grandiose posturing, but I think that it also represents a definite and ironic strategy in resisting fixity, and furthermore mocks the strategy by which people are forced into gender conformity. It says "That which you make of me, is not me." Another identity is created out of nothingness, to house the personality, projected onto the air, called into being by naming (if we´re going to get all Heidegger about it - and frankly why not?) all of which refutes any notion of the naturalness of gender. Gender can´t really be sealed up in nature if it can simply be fabricated with a few words at any given moment, you see, it is always fabricated, that´s why we need gendered language, to keep pushing us back in line.

And isn´t it interesting that the only real way to regender English is to put it in the third person? The third person for the third gender - she loves a lingustic theory.
Posted by La JohnJoseph at 2:47 PM No comments:

This is the first footage from Alexander's studio Session at Orange Ear last month, and it is a duet with the Boobalicious Mary Ocher.

Posted by La JohnJoseph at 4:26 AM No comments: