Here's a lovely flier for the first Alexander show of the Winter in Berlin. It's a fundraiser, which doubles the need for you to be there. 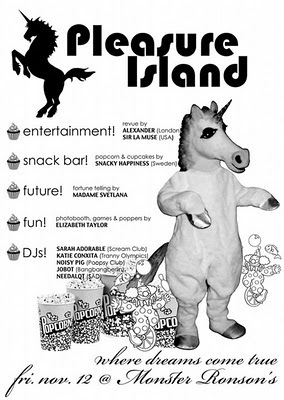 And here's a lovely article from Bang Bang Berlin

"Sodom can come disguised in many forms, is it that man lurking behind the bushes in Tiergarten? Or possibly it's the lady who measures bra sizes in underwear shops? Who knows... But Ladies and Gentleladies I have sodom in a much richer, riper form for you... Yes, The next installation of Sodom into our hearts comes in the form of a very witty, very enigmatic English young man.

You may be thinking about me, but no, unfortunately not, This fiery redhead goes by the name of La John Joseph.
I saw John Joseph perform many months back now at homo-house "Chantals House of shame." I, like everybody else in the room, was hideously captivated by not only this lovely chaps mirmaid-esque luring voice but the lyrics and the way he works the crowd, Already I was bitten by the John Joseph wasp and craving for more venom, So it was only the other week when I got news around the bush that La John Joseph has now moved to Berlin... Score. What makes it even better my pretties is that he has some gig dates coming up... Double score. In venues across Berlin such as smash hit Karaoke bar "Monster Ronsons" along with King Kong Club and Neukölln based lesbian leftist heaven "Silverfuture". This man is on fire, make sure you are there to see the fire display, It is something no short of a spectacular evening to be had, not quite the sodom you were expecting, no dark rooms this time, no hefty hangovers or names in your phonebook the next day which contain numbers and punctuation due to you being so drunk.
No, This time you are going to experience some real homosexual hugging, captivating cabaret talent who's lyrics are not only witty but politically, geographically and life affirmingly accurate to todays lifestyle. But don't take my word for it, there is an endless list of compliments from the homo-press just gagging to say lovely things about him."
Posted by La JohnJoseph at 1:54 PM No comments:


There's a great story which I remember reading, about Kate Bush in the late '80s finding herself under pressure from the record company to cut a new album. After various attempts to persuade the powers that be, that her family had taken precedence and that she just wasn't ready to make another album, Kate was forced to call a meeting with them in order to keep the peace. Unhappily she invited the record company people to her house, agreeing to show them what she had been working on. When they arrived Kate produced a tray of fairy cakes and said; "This is what I've been working on."

On a similar note, this is what I've been working on. 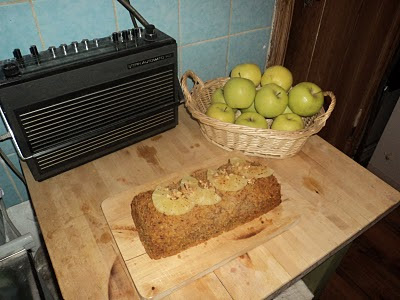 Oh, and learning German, filing my taxes and preparing for the 5 Alexander shows in Berlin. But, mainly baking.
Posted by La JohnJoseph at 4:26 PM 1 comment: 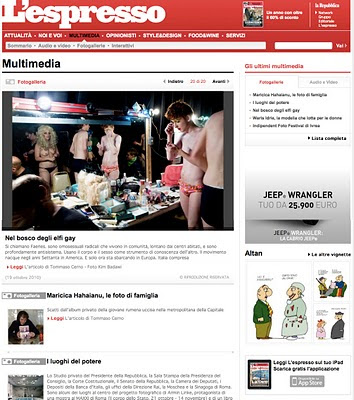 This was in "L'Espresso" today, made me miss New York.
Posted by La JohnJoseph at 1:06 PM No comments: 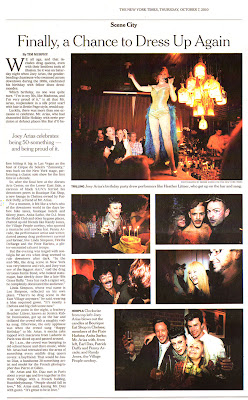 Back in March I blogged about the upcoming Joey Arias shows in NYC, produced by my dear pal Earl Dax. At the time they were fundraising to cover the costs of such an expensiver production. Well, now the show has debuted, to rave reviews and I feel so proud that Earl made it happen, against such great odds as always! The New York Times ran this great feature on Joey's birthday celebrations, doesn't it have such a fin de siecle feel? Don't you want to be there? Click on the image to view the story lover.
Posted by La JohnJoseph at 8:09 AM No comments: 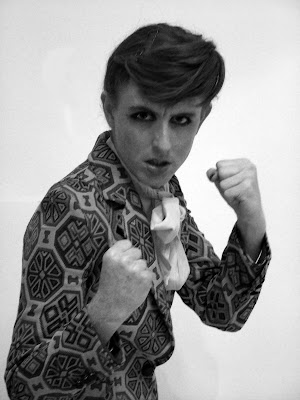