I'd like to take the opportunity to share with you these brief selections from Frank O'Hara; born June 1926 and died July 1966.

"Now I am waiting for the catastrophe of my personality,
to seem beautiful again" - Meditations in an Emergency

"I am the least difficult of men. All I want is boundless love.
Even trees understand me! Good heavens, I lie under them, too,
don't I? I'm just like a pile of leaves." - Mayakovsky

"there is no snow in Hollywood
there is no rain in California
I have been to lots of parties
and acted perfectly disgraceful
but I never actually collapsed
oh Lana Turner we love you get up" - Poem (Lana Turner Has Collapsed!)
Posted by La JohnJoseph at 3:08 PM 1 comment: 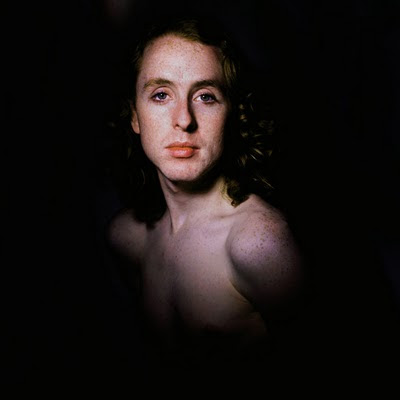 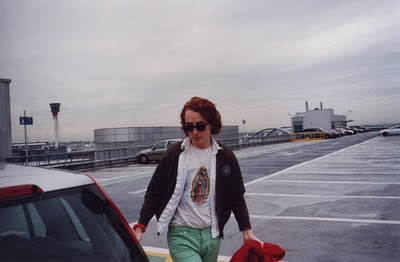 Okay lovers, dates for your diary.

28/5
5pm De-Shell at Cargo
Tranny BBQ with performances from Amanda Pet and a duet from me and Des O'Connor
And then!
9pm Poodle Club at Blush Bar
Lesbian comedy club. Go figure.

29/5
Rent a Boy, NYC
Stevie Hanley and Gerry Visco present new artworks with poems from me (live via satellite) and Max Steele (live).

Performances in Poland, Paris and Edinburgh to be confirmed - so watch this space.
Posted by La JohnJoseph at 1:54 PM No comments: 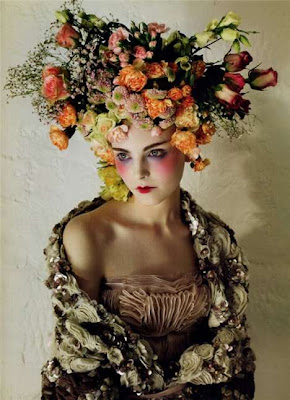 Tonight I touched your imperfections, I stroked them and with love, I saw your joins, the lose thread in your sweater.
You have dandruff, and I don't mind that, it doesn't gross me out.
I almost feel medically professional about it, looking at it without disgust in an orderly manner as though there were something I could do about it.
I accept it as a fact, without judgment.
I find it in someway charming even, a dusting of humanity that somehow makes you more divine, that abstracts your one step further from the requirements of personhood and frees you up to be as high-handed, condescending and wonderful as you are.
This is what it's like, encountering your flaky scalp, like seeing a baby sneeze for her first time and realizing with no small awe, that yes, she's capable of that.
Posted by La JohnJoseph at 6:54 PM 1 comment:

Just back from Manchester where Alexander made his Northern England debut at Queer Up North!

Tomorrow, Mon May 24th, is the Time Out Eurovision tribute at Udderbelly on the Southbank. I have a very inconvenient tech time and I'm nervous to say the least. I will be presenting an homage of sorts to Cliff Richard, the polyester face of British rock'n'roll, accompanied as always by side-car to the stars, Jordan Hunt. So that's nice. 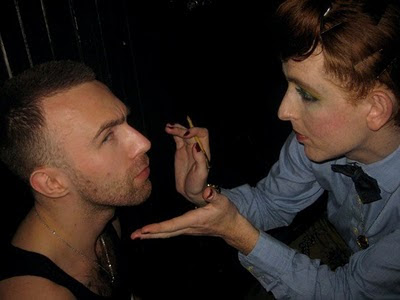 Alexander touches up the visage of the already immaculate Chris Sutton.
Posted by La JohnJoseph at 2:26 PM No comments:

If you only do one thing this week!

Dear all, my outrageously overproductive friend and mentor Earl Dax is currently putting together THE most staggering new show - and he needs your help. That's right lover, your help. 
Known for his intercontinental work as a producer and curator, on shows such as Weimar New York and Tingel Tangel, Earl is creating a new show called "The Z Chromosome" with the original downtown diva, the indestructible international chanteuse that is Joey Arias. Joey of course scored a huge off-Broadway hit last year with "Arias with a Twist" - a show that prompted the NY TImes to splutter, "Eat your heart our Madonna." And the costumes will come courtesy of Thierry Mugler! Fresh from Beyonce's world tour and 30 years of fashion history Mr Mugler is putting his titanium hot mind to work on some thrilling designs for Ms Arias.


SERIOUSLY it doesn't come more exciting than this, and all that's needed is a mere $7,000 to make it work. You can be a part of showbiz history by pledging any amount from $12 to $10,000 online at http://www.kickstarter.com/projects/earldax/developmental-worksohp-for-z-chromosome-the-essenc . Not only will you get the delicious sensation that accompanies the knowledge that you're doing something wonderful for the world, but you will also get fabulous thank yous from the creative team; CDs, t-shirts, tickets to the show, all depending on the amount you pledge. But hurry! There's only six days left to help make this wonderous vision a reality. Sorry, a surreality. 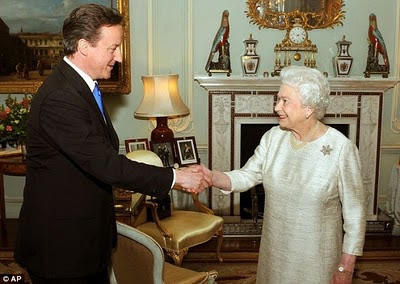 When George W.Bush ran for a second term as President, I campaigned against him, in actuality, at street level. I drove from California to Nevada and went door to door, persuading Democrats to come out and voted against the incumbent President. I'm not an American, I wasn't campaigning on personal "I don't want my taxes going to them" grounds, but rather because I saw, as a citizen of the world, that President Bush was wreaking havoc on a global level. I believed (and still do) that the US had taken a horrible veer down a blind alley of greed, mercenary impulses and xenophobia and I wanted to stand against that. Similarly during the last US election, I got very much involved in the political discussions both in the UK and the US, I had out and out arguments with people who accused Americans of being flagrant racists who would never elect a black President. I remember waking up and hearing the news and feeling jubilant, and seeing the headlines everywhere and knowing that across the world this was the topic of conversation.

Last week the UK general election resulted in a hung parliament, with no party able to claim the majority needed to form a government. The Liberal Democrats, it was clear would have to form a government with either Labour or the Conservatives to make up the numbers. Until this election the Lib Dems have always been thought of as something of a noble but lost cause, so to see them go from also-ran to king makers in the space of a month was really rather astounding. To my chagrin the current (Labour) Prime Minister stepped down today, not to clear a space for a new Labour/Lib Dem government but rather a Lib Dem alliance with the Conservatives. My distaste for and stance against the Conservative party has been much discussed on this blog, and needless to say the sight of David Cameron entering Downing St as PM fills me with great sadness.

Sadder still am I made by the resounding lack of interest or understanding coming from contacts in the US regarding this election. It's as if all those cliches about Americans and their entire lack of cognition of a world beyond their borders were true, as if all those jokes about frat boys who ask "Is England in London?" were in fact not jokes. I am no nationalist, I find the UK bearable at best, but I can't help feeling let down by some crucial American allies in this arena. How could you not know this? How can you not see what's going on? It makes me wonder if they are all inherently egomaniacs and isolationists. This election has seen a Prime Minister's resignation, the first coalition government in the UK since WW2 and may well see the voting system change to proportional representation. This is not a squabble in a church hall! The UK holds a permanent seat on the UN security council, and it is the world's fourth biggest arms dealer, it is deeply embroiled in the wars in Iraq and Afghanistan, as well as the stalemate in the Middle East. It is a country with a steady and determined grip on how world policy shapes up, which environmental treaties pass, which schemes to alleviate poverty go into action - what happens in London affects you, lover.

The whole deal brokering scenario leaves me with a bad taste in my mouth, Liberal Democrats and Conservatives seem to make terrible bedfellows. But more so the way the media trumpeted this decision as if it were already made, before the votes had even been counted, unsettled me to say the least. The idea that the Conservatives without a majority should somehow by an esoteric mixture of default and morality, automatically come to power is absurd. They did not win the election but the news media paved the way (with their insistence and repetition of the "rightness" of Cameron for PM) for a Conservative/Libe Dem coalition government. Is this not exactly how George W. Bush won his first election? With thanks to news teams hammering his "victory" home and making Al Gore look like a sorry spoil sport and a sore loser? Is it JUST me? 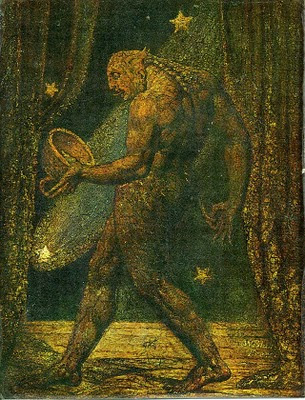 I write this from onboard a train across the UK. This alone is amazing to me, technology and the fragility of it all. The frailty of it all, the by-a-threadness of us all. The ice cubes in my whisky and coke (real glass, lover) are clinking like something out of a disaster movie as we, I and they, hurtle through the purple darkness a journey that almost feels like a plane ride (a plain ride, a plein). Time and space, distance and direction, lost, from my head at least, though hopefully known to the great invisible hands that turn the wheel and steer the ship to shore.

Only a few days ago the whole continent was brought to a halt by a volcanic ash cloud that seemed suspiciously simplistic. And here we all are, going about our business, tenaciously, as if there were anything under our feet but earth, which melts and slides away, congeals elsewhere, cracks open wide, shifts, erupts, erodes, is swallowed.

We hang by a wireless signal, on frequencies we don't really understand, but take for granted all the same. That to me, does not seem like the definition of wisdom, or indeed of learning from one's previous mistakes. Back it up, lover. Only there's no external hard drive big enough, no usb stick with enough memory to handle all of this, experience.
Posted by La JohnJoseph at 1:50 PM No comments:

The company we keep. 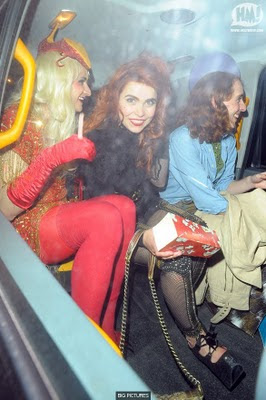 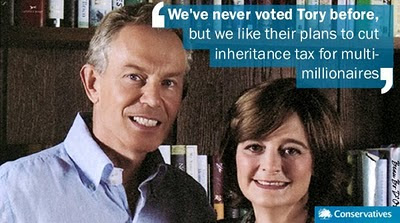 On Thursday if you're of a political bent - and lover, this is the week of the general election, so if you're not political it's time to GET political - you can hear me guest on Scottee's myspace radio show, alongside filmmaker Heydon Prowse. And to make a double bill of it that evening I'm previewing extracts from my forthcoming show "Underclass Hero" at Boom Boom Club with a whole host or reprobates.
Posted by La JohnJoseph at 3:45 PM No comments: