Another review, this time fromThe Evening Standard and the trailer.

Posted by La JohnJoseph at 6:18 AM No comments:

Yesterday whilst watching "The Septmber Issue" with Blancerz, I realized that Grace Coddington (Vogue's Creative Director) looks exactly like my Auntie Marjorie, or vice versa. Perhaps this is why I have always felt a deep love for her work. And of course it's made all the more amusing by the fact that I used to sneak into Fashion Week shows pretending to be her assistant; Grace's that is, not Marjorie's. 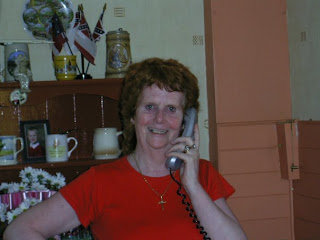 Grace Coddington
Posted by La JohnJoseph at 5:21 AM No comments: 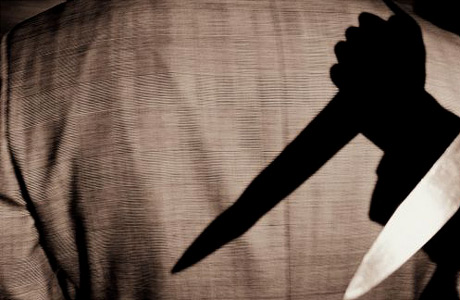 The first reviews of INFINITE VARIETY are here, fromThe Round House Red Top and What's On Stage.
Posted by La JohnJoseph at 4:49 PM No comments:

Today, as part of my cinematic self-education process, I went and saw Derek Jarman's 1977 film "Jubilee". It was literally the best possible way to spend a Saturday morning. By turns hilarious, disturbing, hypnotic, ridiculous, camp, grandiose, violent, loving and snarling it is as close an encapsulation of punk Britain as I have ever seen. Set in a near present of civil war, urban disturbances and roaming gangs, an era when law and order has been abolished, it is both the ultimate expression of NO FUTURE and an imagining of what the country would look like after that (no) future.

Born as I was in 1982, I grew up at the tail end of punk, and remember clearly both the look and the political upheavals. I remember race riots on the news and tax riots in the papers and the closure of all England's old economies, the hopelessness of being poor in times of unbelievable new wealth.

To look back now on the film (and indeed the era) makes "Jubilee" seem like a piece of nostalgia, no, scratch that, it's more powerful than that, it's a souvenir, it has the power to make that epoch "come again", to conjure it back up. It is still such a vital film, so full of apocalyptic anger, so contemporary in its approach to compiling material and storytelling; it casts a long shadow forward onto everyone from Kathy Acker to David Lynch .

It is not a film that shies away from vulgarity or violence, it feels very authentic, and at times the "realness" of the performers comes across to such an extent that the acting is decidedly dicey. However, the raw feeling that genuinely anything could happen at any moment, and the flair with which the cast dismember pastiche after pastiche of British culture is terrifying. The queen gets jumped and murdered, the police have fire bombs thrown through their doorways, pop stars are strangled, lovers are suffocated mid-fuck, and incestuous brothers shot at the pin ball machine. And all without a hint of irony, all without any redeeming glamor.

It is a strange film (but utterly watchable, though not always pleasant) made all the more pulsing by its supporting cast of punk rockers (established, up and coming, would bes), the whole chorus of them ridiculing the very notion of being a punk "star".

And of course it's nice to see that at one point it wasn't necessary to be emaciated to be radical.
Posted by La JohnJoseph at 4:25 PM No comments:

This is 20 years old and still cracks me up.

I grew up with this T.V. show and I think that explains A LOT.
Posted by La JohnJoseph at 7:10 PM No comments: 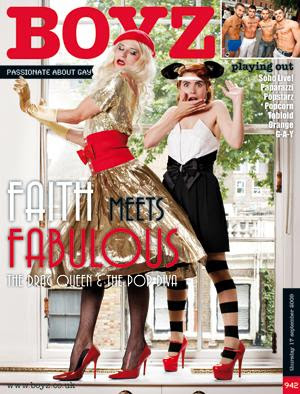 This week's BOYZ magazine features a lovely artistic collaboration from pop starlet Paloma Faith and tranny superstar Russella, and I just love it (especially the run in her fishnets).
Posted by La JohnJoseph at 6:24 PM 1 comment: 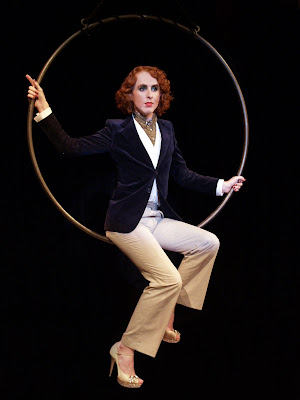 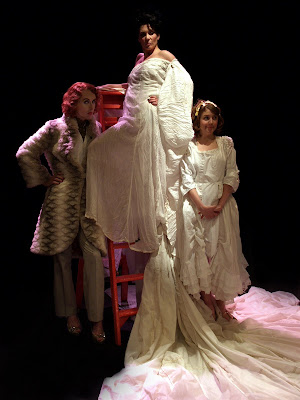 The first pictures from the set of my new hit show, Infinite Variety, by Roberta Bratovic.

And YOU can win tickets to the show by entering this competition over at Run Riot!
Posted by La JohnJoseph at 5:05 PM No comments:

I love you, sincerely.

Posted by La JohnJoseph at 3:27 PM No comments:

From this weekend's Il Ballo in Mascara event, produced by Jonny Woo as part of Deloitte Ignite 2009, curated by Time Out. 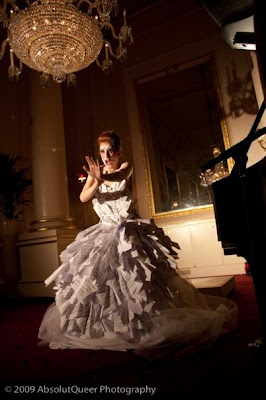 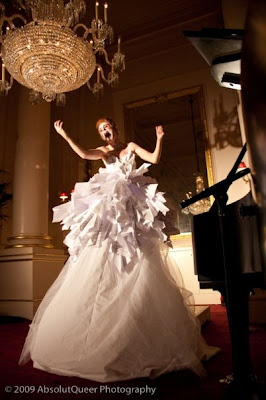 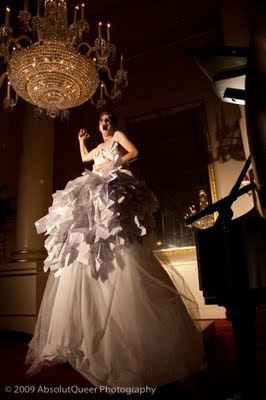 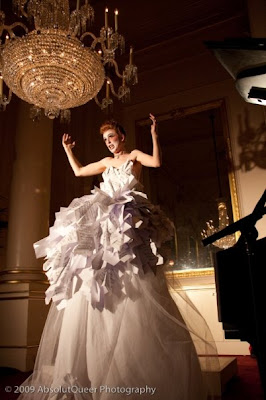 A scene from "Now Voyager" to which I am performing in "Infinite Variety", which, let us not forget, opens next week.
Tickets here.
Posted by La JohnJoseph at 3:46 PM No comments: 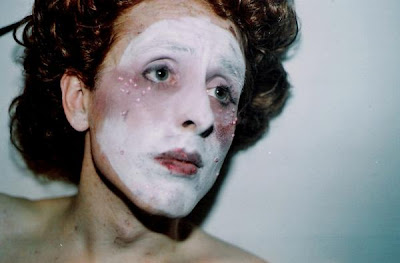 This weekend as part of the Deloitte Ignite series I wil be performing at the Royal Opera House in London. Obviously I'm terrified. Listen here for a preview.
Posted by La JohnJoseph at 5:41 AM No comments:

Like the rest of this blog, probably not advisable if you're high.

Endlessly disturbing dental set-up aside, this old Betty Boop clip is one of the strangest things I have seen for a while. The laughing grave stones are really something, and the bridge that chuckles; "Don't make me laugh!" is too much.

As a side note, why do you suppose Betty laughs so much when her pal yells in pain, as she tangoes him around the room? I guess she is dressed for sadism.
Posted by La JohnJoseph at 4:52 PM No comments: 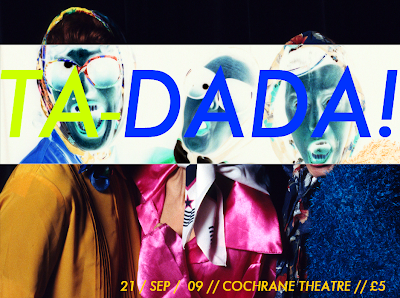 Ta-Dada! is the perfect opportunity for you to see my hit operetta, "Golden Years", my hit play "Red Heads of History Solve a Murder Mystery" and hear my hit disco songs. Plus there are many cameos, monologues and special guests. It's a sort of retrospective, in conjunction with dear old Jordan Hunt.
Posted by La JohnJoseph at 2:34 PM No comments:

Feelings of nostalgia for a place you never lived. 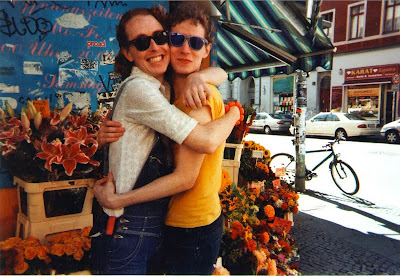 I got back from my disco music mini tour of Berlin a few days ago, after a positively brilliant time. I played 5 sets, two of which I sang alongside love of my lunchtime, Max Steele. I must say, I was very pleased with the response to my new music, and even more pleased to be offered additional shows later this year.

The trip itself was full of all the behavior you would have come to expect, so I won't elaborate any further this time. Suffice to say there were a lot of long nights, a lot of arguements with strangers a lot of dates, and surprisingly A LOT of wasps. Though I seemed to be going through some real-deal aggression expression (seriously, I got into SO many to-dos) I did in fact enjoy my time in Berlin, taking day trips to the zoo, napping in Stevie's studio, and gazing lovingly into the crystal blue eyes of the Lady Steele. 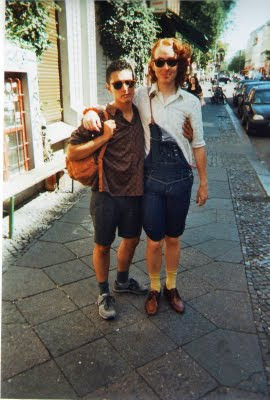 I will be back in Germany next month to play a death metal show as part of my dear friend Stevie Hanley´s art show, "The Devil is a Loser". Details forthcoming.
Posted by La JohnJoseph at 1:45 PM No comments: