And so, here I am back in Berlin, staying with Stevie, touring with Max Steele, And I literally couldn't be happier. We played here night last night.
Posted by La JohnJoseph at 4:22 AM No comments:

This week's BOYZ magazine contains my musings on who I'd like to have at one of my candle-lit suppers. Click the image to view all the gossip in glorious high-resolution. 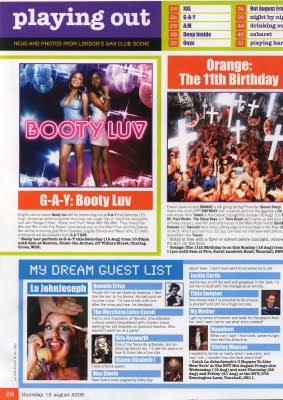 Posted by La JohnJoseph at 5:35 AM No comments:

Thought you might be inclined to take a look at this, a new project from Dawn Right Nasty.
Posted by La JohnJoseph at 6:33 AM No comments:

Two recent experiences have made me feel very romantic towards technology. "Poor. Old. Tired. Horse." at the ICA and David Shearing's "Man Made Dusk".

The ICA show (as a retrospective) incorporates equipment that is now obsolete but poigniantly so. Especially lovely are the printed poems, spewed out from late '70s desktop computers, with their weird, solid colorways.

"Man Made Dusk" (a new piece) is all about radio waves, and utilizes technologies currently becoming out dated. It makes me oddly nostalgic for radio (a medium I in fact am still in regular discourse with) a technology sliding from view, replaced as it is being by online medias and mp3s. Of course people still listen to radio, and figures show that in fact record numbers of people are doing so in the UK, but more and more so the radio (as an object) is replaced by car stereos and computers and concealed speakers. The sounds come through satellites, they are digital, and they are channeled through discrete machines. The trusty old clunky knob-twiddler on the kitchen counter has gone, morphed into something sleeker, hidden.

Isn't it an odd notion to think of technology, machines, tapes and electromagnetic fields as Romantic? To be nostalgic for technology, which is to say, for the future.
Posted by La JohnJoseph at 7:18 AM No comments: 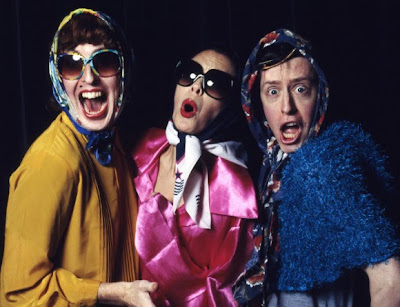 Golden Years: The Upper Clapton Light Operatic Society Revue of Operatic Selections (with a free glass of champagne) premieres this weekend at the Riverside Studios as part of the Tete a Tete opera festival.

The Upper Clapton Senior Citizens Light Operatic Society are back in town! Desperate to impress Hackney’s art’s council funding co-ordinator, Claudine d'Armoire, the atmosphere is fever pitch. Will Lavinia see her dreams realised posthumously? Will Jeremy’s angina flare up with all the stress? Will Toots get the grass stains out of her new Summer frock? Only time will tell!

It's a collaboration with my long-suffering musical companion Jordan Hunt and you can read all about it here.
Posted by La JohnJoseph at 7:06 AM No comments:

Last night I premiered my disco material at Jonny Woo's Lite Entertainer. Next, I'm taking these smash hits to Berlin next weekend for something of a mini-tour with mon amour Max Steele. Then I'm living it up in a high art style, at the gay museum alongside, ma cherie Stevie Hanley and his dance squad.

Apparitions are proof,
positive,
that there is not a partition,
lover.
Posted by La JohnJoseph at 8:29 AM No comments: 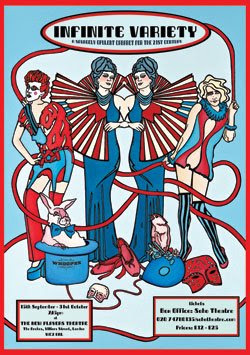 Opening Sept 15th at the New Player's Theatre, London.
Book here, now.
Posted by La JohnJoseph at 8:11 AM No comments: