I have a lot of cute friends 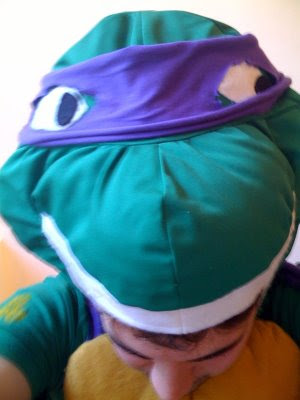 Posted by La JohnJoseph at 12:43 PM No comments:

My dick is just a metaphor

When I was 8 or 10 my favourite song was S’Express, I had it on a tape cassette called Hits ’88, it was a double cassette with two tapes in it. When I was supposed to be tidying my room I would put it on and dance to it and at my birthday party we played pass the parcel to it. When I was 8 or 10, my step-dad put me and my two sisters in the bath together every Sunday night. Then when we were all clean he’d take each of us to our bedroom, separately, and spank us over his knee – because we had been bad. Because our rooms were untidy or we had stolen cookies or something else very bad. He always hugged us afterwards though; it was bath, spank, hug – just like that. He did it because he loved us and didn’t want us to be very naughty children like Suzie who had to go and live with a different family because she was so bad. We must have been very bad children though, because he did it every Sunday night.

I’ve been listening to Karen Finley’s disco music a lot lately. It really makes me want to dance, I find it very sexy. You know, there’s a sample of her work in S’Express? That line; “Drop that ghetto blaster,” – that’s her. I only just realised when I saw the video on youtube.

When I was 8 or 10 I really loved dancing to music and I really wanted to go to a rave, but they were only for teenagers and bigger kids and the news said they were very, very dangerous. I wanted a swimbag for school with a big yellow, smiley face on it, but I got Garfield instead. Garfield’s cute, but I wanted a smiley face. My Mum heard all about raves and said she thought they were trouble too, she knew danger when she saw it. I was lucky to even have the tape cassette at all I guess, but I’m glad I did because we played it at my party and we all danced and Rachel got dizzy and said she thought she was going to faint!

When I was 8 or 10 my Mum got another divorce and my step-Dad had to move out and my Nan was very upset about it all and said that one divorce was bad enough. My Mum said that sometimes grown-ups stop loving each other and that it wasn’t fair on the children but that it wasn’t the children’s fault and that the grown-ups never stopped loving their children. I liked it better without him anyway, when he left we hardly ever had to go to school at all and I got to listen to a lot of tapes.

My Mother actually divorced her second husband because he was run out of town. He was babysitting the neighbour’s kids, the parents came back early and found him….Well, no-one ever completed that sentence but my Mother kicked him out anyway. My Mother only told me recently the real reason for the divorce. She only told me, not my sisters. She only told me because I have a penis and I’m capable of hearing stuff like that, because I have a penis and need to hear stuff like that. Was it a warning of the dangers of a man’s body? Did she expect me to perpetrate myself, to perpetuate the family line? To fuck a little girl for myself? Too bad I can’t get it up for babies, huh? Too bad I have such a taste for dick in my mouth. My penis is just a metaphor. But, we never spoke about that. Anyway we had enough to discuss, because a week after he left, he returned, in the middle of the night, picked up a hammer and smashed everything in the house into infinitesimal pieces. Kristalnacht, right? Every plate, the TV, the gold-fish bowl, doors, cabinets, mirrors, glistening fragments. It was like a disco, light bouncing everywhere, the neighbours said we’d be finding bits of glass in the carpet for months and I wanted to go dancing so badly.

When I was 8 or 10 I went to the park with my Grandad and all my cousins and we all had ice cream sandwiches and my cousin fell in the duck pond and got all slimy! I needed the toilet and my Grandad told me to just wee in the bushes because I shouldn’t go to the toilets in the park because they were full of perverts. I always felt very curious and sorry for the perverts, but that’s because I am a pervert too.

I was watching the S’Express video on youtube in my living room, I was dancing around, I always laught when that Karen Finley sample comes in. I was thinking about being 8 or 10 and getting spanked every Sunday night like clockwork. My friend Thain told me that he had a client who he would meet at the Golden Corral in Coney Island at 8 am, and this client would rim him for hours and implore him; “Please, do it Brad, please, shit in my mouth.” Thain was always too squeamish to do it, 8am is very early for that kind of business I guess, but even kinky people have schedules right? Eat ass 8am-10am, spank babies 6pm.

I was watching the S’Express video and laughing about Thain and Karen Finley and getting ready to turn a trick on Park Avenue. I was making sure my dick smelled clean and that my pubes were trimmed, when my Sister called. I thought he was just spanking her, I never asked. We never spoke about that. But she wanted to talk now, although she couldn’t actually. Find. The words. She told me about the flashbacks and the nightmares and how long it had taken her to piece it all together.

When I was 8 or 10, my friend Suzie had to go away and live with another family and everybody said it was because she was very naughty and that’s what happens to naughty children, and they don’t get any Christmas presents either. Everybody said that Suzie was a very bad little girl but I knew it wasn’t true, she told me so. She told me it was because her Daddy did bad things to her, she never did any bad things and it just wasn’t fair.

The Lighter Side of Domestic Violence


From a conversation I had, this evening, with my Mother.

"Do you remember when we moved to that place in Rossall, that estate that looked like it had been transplanted from the mid-West? All the neighbours were terribly posh, all painted their houses and mowed the lawn once a week. And I was married to Phil and we were having that big fight and he went to punch you in the face, and me and you and Nicola got together and pushed him right out of the front door?

Well, I was calling him all the bastards I could lay my tongue too, and the woman next door was out there washing her windows! Oh, well, she nearly wet herself, she just stood there with her mouth wide-open and Phil kicking the door in, and us all inside, hysterical. But she never took her cloth off the window.

That reminds me off the time we had to go and save Lynn Parky from herself, when she called me up in the middle of the night and said, 'I'm gonna kill 'im. I've got a knife in me handbag an' am gonna kill 'im.' I don't know what he'd done this time, he was always beating her up or taking all her money, but she was serious.

And do you remember that we had to go 'round at three in the morning to stop her from driving to his house? When we got there she was plastered, she was slurring and hiccuping and she had this great big knife in her purse and her make-up had smeared all over her face. We had to stay there for hours telling here it wasn't worth it, me and you in our pyjamas at four o'clock in the morning."
Posted by La JohnJoseph at 3:27 PM 1 comment:

"Tranny performance isn’t all Eddie Murphy in a fat-suit. Why, it can be a fat tranny in his birthday suit doing a reverse strip (Glenn Marla), a troupe of thin and muscular contemporary dancers in tight dresses (the Pixie Harlots), or a beguiling New York City schoolteacher on piano (Our Lady J)—all part of Justin Bond’s Lustre. This was definitely the year that trannies ruled the New York stage, what with Taylor Mac and Joey Arias ruling the upstairs and downstairs at HERE; Novice Theory and Our Lady J coming together in a powerful double bill at the Zipper; and boy-lesquer La JohnJoseph escorting us through a gender confessional at Dixon Place. But taking the cake, for sheer numbers alone, is Lustre, which Bond developed at P.S. 122 and later moved to the Abrons Art Center. Bond amassed the widest array of tranny talent found in his phone book and put on a tremendous and unforgettable show."
- Village Voice Best of 2008

I think it's quite an achievement to get a sentence in amongst all of that, don't you?
Posted by La JohnJoseph at 7:19 AM 3 comments: 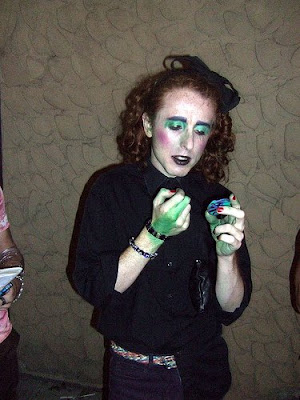 You know, I really do love New York. This extract from OUT! magazine reminds me just what a magical place it is.

"Well after midnight the Mattachine 2.0 crowd spills out onto the sidewalk. I ask performance artists Joseph Keckler and La JohnJoseph and their friend Stephen Kent Jusick, an experimental filmmaker: Why are we getting all verklempt about a painful, dangerous time for gays?

“I think a little homophobia goes a long way in keeping us strong and not soft.”

Joseph, who’s sort of dressed like Madonna in Desperately Seeking Susan but with black lipstick, disagrees: “As much fun as homophobia might provide us, there are kids in places who aren’t as lucky as us. If they want to wear black lipstick, it’s a hassle for them.”

Joseph takes offense. “I am hardly the face of assimilation!” We’re all interrupted when a huge, belching garbage truck backs up on the sidewalk. “Dive in, dive in!” people start shrieking. A garbageman in a do-rag that reads PUETRO RICO scowls at us. It all feels very Old New York, with rouged nelly queens and surly trade mixing it up." 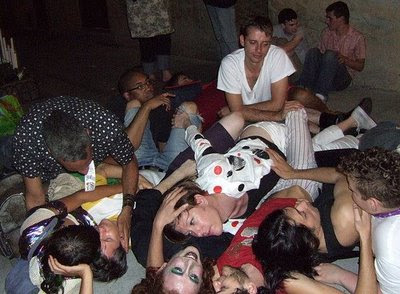 I licked my spoon in delight.

Saturday, ate a banana split with the sun pressing up to the window. Cream on top of ice cream, a few fat fruits, ground pistachio like moss, a banana like a longship, Viking vessel of exploration, oak tree hewn in half to tell the time since life began, in concentric circles. Frothy like the birth of Venus, bottomless like a heartbreak, waitress with a lisp like an old room mate, the fair rumble of traffic grounding me. The spoon, Greta Garbo, throws a haughty shadow across the glass, prisiming, dives, Esther Williams, solo synchronized swimming in an innocent soup of honey, Shirley Temple. I licked my spoon in delight as I realized that I hadn't been this happy since we smoked our brains out in your room, and coloured in pictures of dinosaurs on your bed all afternoon, with just the cat for company.
Posted by La JohnJoseph at 7:11 AM 2 comments: