Posted by La JohnJoseph at 10:42 PM No comments:

If you're in LA tonight. 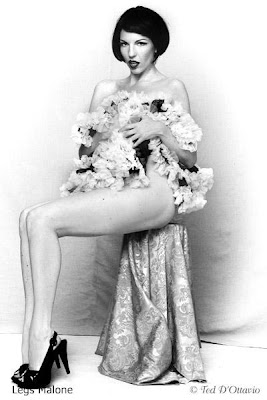 Then check out one of New York City's most beautiful burlesque starlets, Legs Malone at Three Clubs. She's only in town for a little while, so snap to! Here's she and I doing our (soon to be reprised) duet, at HyperGender burlesque.

What a pair of tarts. 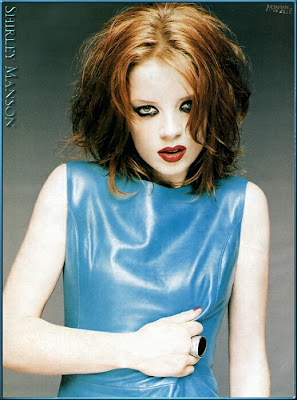 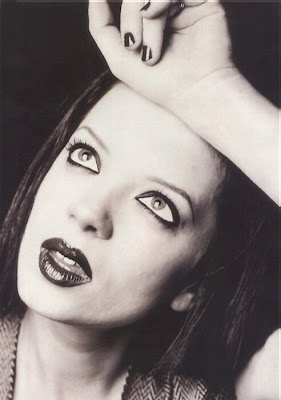 Who didn't want to be her?
Posted by La JohnJoseph at 9:35 PM No comments: 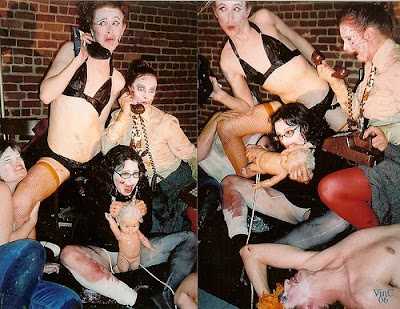 Thanks to Vin C for the picture.
Posted by La JohnJoseph at 6:51 PM No comments:

It's funny because it's true.

And it's true becuase it's funny.
Posted by La JohnJoseph at 2:28 PM No comments:

Night of a thousand cocktails. 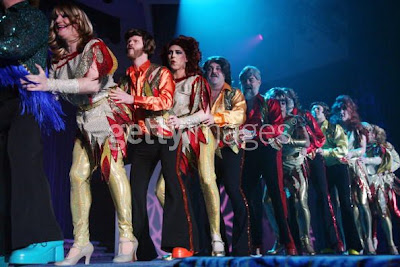 I woke up this morning with gowns, capes, furs and high heels strewn far and wide. A half eaten box of chocolates sat wistfully on my desk, and the contents of a Solgar Vitamins gift bag strew across the sofa. Yes, ladies and gentlemen, last night was night of a Thousand Gowns, THE single campiest experience of my life.

Everybody and their Mother (yes, literally) was dressed way passed the nines, in wigs higher than the stars and gowns that stretched out longer than the historical periods which inspired them. Yes, there was some serious First French Empire realness going on with a table full of party goers decked in gold brocade and powdered wigs. And the Tudors got a look in too, the Elizabethan high collar and small waist silhouette proving very popular amongst some of the courtiers, not to mention a perfect cavalcade of antebellum hoop skirts and curls.

Growing up in the yUK I was familiar with the tradition of pantomime, but nothing really prepared me for the enormity of this. The whole spectacle was somewhere between a Disneyland parade and a civil war re-enactment, with smoke machines and a giant cardboard disco ball thrown in! It was all very jolly, but I couldn't help but wish for a downtown version of the festivities; a more deranged affair for the demi-monde. And quite what this Imperial Court thing is all about I don't know. God bless them all for the untold piles of money they've raised for good causes, but is it always necessary to mimic those old systems of snobbery and colonialism? I almost felt uncomfortable with that, and I haven't felt uncomfortable about anything since 2004, when my dress fell down whilst I was onstage delivering a very poignant speech as Margaret Thatcher. Comfort I realised, is overrated.

Of course the stage show, was fabulous in a kind of never ending, what's-actually-happening?, oh-wait-how-did-we-get-from-Saturday Night Fever-to-Bette-Midler-so-quickly? kind of way. Truth be told, Sharyn Jackson (the downtown Dorothy Parker) and I were actually terribly moved by the Midler on the Roof section of the show. The Rose I always find so very moving, ever since last weekend when two of my dearest coke fiend friends burst into my room at 9.30 am (AM!) and demanded that I play Bette Midelr clips to them from youtube. Sharyn had rolled in about an hour and a half late, working a power dyke look; aubergine sparkled gown under a black dinner jacket and a smoky Weimar make-up look. She looked like the scandalous daughter of a dish soap heir, like she had run away for her life of privilege to slum it and make love to shapely women.

There were a lot of shapely women there, and truth be told I was living for them. Dirty Martini came over the horizon looking like Mae West on a mission to Mars, an incredible green cape over a leopard corset and a hairdo that looked positively picture perfect. Both of Coney Island's reigning queens,Bambi the Mermaid and Bunny Love (replete with stick-on mustache) looked radiant, as did a rather foxy looking Maine, who attended the ball in a deliciously form fitting three-piece suit, looking every inch the 'thirties anti-hero. And then there was of course the Pixie Harlot contingent, working it for all it was worth, and then some. Darrell took it to another dimension with a ballgown made from heating duct wiring, whilst Mattie went for a more subtle look with an elegant blue smoking jacket and a yard of sequined fabric wrapped around his face. And

of course Mother Superior herself, Machine Dazzle, crowned the table with a diamante skull and black feather headpiece, atop which sat a little luminous sparrow, whom we nicknamed Edith for the late Ms Piaf.

And the booze flowed, and the photographers snapped, and before we knew it seven hours had gone by and we had seen all one thousand gowns, and we were standing in Times Square posing for hysterical tourists and yes, more photographers. It really was a special evening, highlights being the discovery of Bambi and Bunny's drugs den (under our table!) and sharing the honor, with Machine, of being called a "dirty, filthy slut" by Lady Bunny. For your information I was actually very modestly dressed in a peach and pink column gown with capelet, which I happened upon at a lawn sale in LA.

It just so happened that when I was out for a stroll with my ever precious pal Kristahn, and the "vampy" (Spin magazine) Joseph Keckler one Sunday, a fashion model granny was clearing out her closet in the beautiful weekend sunshine. I got the dress for $7 which is nothing but an outrageous bargain. She also had a set of folk costumes, which piqued my interest. I asked her what she could tell me about them; "Oh those, they came from my old neighbor, a choreographer. Son of a bitch, but boy could he dance! I thought I'd do something with them but that was twenty years ago and I never have." And that my dear, is what you call life.
Posted by La JohnJoseph at 12:32 PM No comments:

It's my new look. 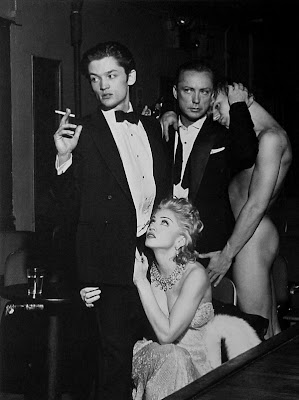 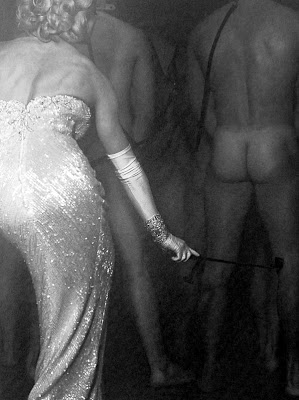 Posted by La JohnJoseph at 3:58 PM No comments:

To whom this blog is dedicated.
Posted by La JohnJoseph at 1:44 PM No comments:

This is me, then.

It's been a rough week. I'm starting a blog roughly five and a half years after everyone else, as a sort of scrapbook for ideas and images I come across. And also as a platform for my self-opinionated discussions on other people's work, and how they influence mine. Girl, I'm giving full-on cross pollination realness. 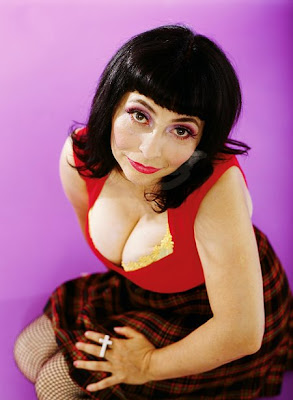 ect your attention firstly to the luminary Ms Penny Arcade, as pictured on this virginal posting. She nursed the howling baby of glam rock out of the womb, she is punk rock's foster mother, an A.I.D.S era Florence Nightingale, and the parole officer of burlesque. You had their poster on your college dorm wall, she taught them how to give face.

Earlier, this week I went to see Rami Shamir read from his terribly poignant debut novel Train to Pokipsie and as part of the evening's table of delights Ms Arcade herself presented material from her show Bad Education. Now, in the time I have been in New York, I have seen Ms Arcade perform more times than I have eaten; and tragically this is not much of an exaggeration. However, I had never seen anything from this show and frankly, it was staggering. She told of how she as a teenage girl, coming down from speed, was pulled from the street and forced into sexual trauma at the butt of a gun. The howls and sobs she brought up, the nauseating terror of a girl in fear for her life was so devestating I could hardly move to cover my mouth in horror. But of course, she's as smart as a whip and will never overindulge her audience in anyone emotion, she snapped out of the depths of this desolation with a whiplash instantaneity and rolled on, into uneasy humor, delighting us all with her encyclopedia of observations.

Honorable mention to Mother Flawless Sabrina (pictured here by Johnny Dynell) who hosted the event as only she can, with an uplifting and pithy sermon on New York's waining underground. We can't wait for someone else to rescue us she said; "You are the people I've been waiting for. You are the people you have been waiti 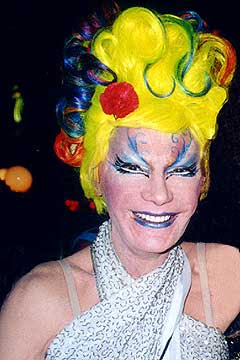 ng for." Hearing her speak, I felt as though I was in a Baptist Church in Alabama at the darkest hour of the civil rights struggle, listening to a preacher leading us onwards to freedom.

Now look at the time! I'm attending Night of a Thousand Gowns tonight, it's four-thirty and I'm still sitting here eating peanut butter in my kimono. In fact, maybe I don't even need to change; it's a look isn't it?